The exhibition Restless Debris, featuring the work of Kevin Jerome Everson, Michelle Dizon, and Ivor Shearer, highlights art that critically deploys “ruin imagery.” The works gathered together in this exhibition are also instances of aesthetic trends that emerged in the wake of the Great Recession, namely the growing prevalence in popular culture of ruin gazing as a means to allegorize the decline of the United States.

Ruin imagery, such as the iconic images of postindustrial decay, feed into a larger national narrative about the avarice of civilizations and the disastrous environmental catastrophes wrought on by unregulated industry. However, these images tend to decontextualize urban, industrial, and imperial ruins and temporally dislocate them from the present day inhabitants, who remain in their shadows. In so doing, the gradual violence on marginalized bodies perpetuated by the spoiled sites of capital are redoubled through pictures that further silence those peripheral communities.

In response, the aesthetic strategies of all participating artists approach their disparate subjects by retrieving an innocuous object from memory—a billboard, a screen, a remittance box—and craft around it a film whose content surveys the complex political, economic, or racist policies attendant to their origins. In their treatment, memory is arrested in the space of the gallery in order for the marred landscapes of capital elsewhere to be resituated into the lived experience of the people who endure them. In short, Restless Debris puts forth the question—what would an aesthetic program look like that activates the sense of unease that ruin imagery so often seeks to mitigate? 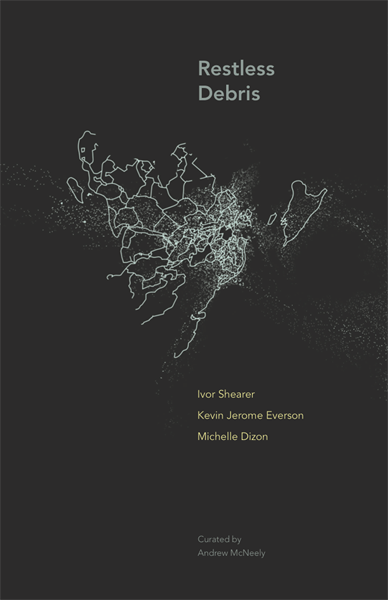